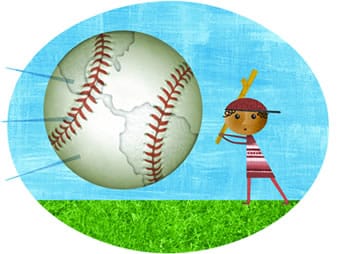 The year: 1972. The place: Pittsburgh, where legendary baseball player Roberto Clemente is at the top of his game. Sam Kowalski and the neighborhood baseball-playing kids are in an intense competition to win the chance to meet Clemente in person. But it is their hero’s fateful off-field actions while aiding natural disaster victims in Nicaragua that teach the kids what is more important than winning.

Looking for Roberto Clemente was commissioned by Imagination Stage, Bethesda, MD, and premiered there in 2008 under the direction of Kate Bryer. It received the DC Theatre Scene Award for Best Family Show of the Year.

With its shimmering chord changes regularly ceding to cheerfully thumping pop-tinged-showtune sounds, La Puma’s music seems to mirror the thematic tug-of-war between idealism and ambition. In her book and lyrics, Zacarías draws her lesson so delicately, and girds it with so much wit and characterization, that the show never feels schoolmarmish — it’s purely exuberant.” – Celia Wren, Washington Post

This world-premiere children’s musical features a buoyant rock score that harkens back to the days of the Jackson Five and 1970s supergroups with tuneful lessons that delve into the nature of heroism. Baseball lovers will find this show irresistible, and the music and engaging and effervescent performances will captivate even the sports-shy.” – Washington Times

KAREN ZACARÍAS (Book & Lyrics) is hailed by American Theater Magazine as one of the ten most produced playwrights in the U.S. and the most produced Latina playwright in the nation. Her comedy Native Gardens,  about race, class, plants, and fences, hit a political zeitgeist and was one of the top produced plays of 2019. Her musical homage to the telenovela Destiny of Desire, “a terrifically entertaining theatrical roller coaster”(Charles McNulty, LA Times) has sold-out the largest regional theaters from East to West (Arena Stage, The Goodman, Oregon Shakespeare Festival) and is now heading to Broadway. Her gripping drama The Copper Children,  about a controversial child separation case in 1905, just had an acclaimed world premiere at Oregon Shakespeare Festival and her bilingual translation of Romeo y Juliet will premiere at California Shakespeare Festival in September of 2021.  Other award-winning plays include  The Book Club Play, Legacy of Light, Mariela in the Desert, The Sins of Sor Juana, and the adaptations of Just Like Us, Into the Beautiful North, and How the Garcia Girls Lost Their Accent. Her work has also been produced at The Kennedy Center, The Guthrie, Cincinnati Playhouse, The Goodman, South Coast Rep, and many more.

Karen is also one of the most produced children’s theater playwrights in the country. She is the author of ten renowned TYA musicals with composer Deborah Wicks La Puma including Ella Enchanted, Einstein is a Dummy, Ferdinand the Bull, Looking for Roberto Clemente, Chasing George Washington, Jane of the Jungle, and Frida Libre.  Karen is also the author of the Marvel play Squirrel Girl Goes to College, and the librettist of several Ballets. She is one of the inaugural resident playwrights at Arena Stage, a core founder of the Latinx Theatre Commons – a large national organization of artists seeking to update the American narrative with the stories of Latinos – and she is the founder of the award-winning Young Playwrights’ Theater (YPT). YPT was cited by the Obama administration as one of the best arts-education programs on the nation.

Karen was voted 2019 Washingtonian of the Year by Washingtonian Magazine for her advocacy work involving the arts. She is an inaugural 2019 Sine Fellow for Policy Innovation at American University for advocating for the intersectionality of art and policy and was selected by The League of Professional Theatre Women to receive the 2019 Lee Reynolds Award given annually to a woman in theater who has helped illuminate the possibilities for social, cultural, or political change. She was awarded the 2019 Medallion by the Children’s Theater Foundation of America for excellence and craft and a 2019 speaker at TEDEX Broadway. A graduate of Stanford University and Boston University, Karen lives in Washington, D.C. with her husband and three children. She is represented by the Gersh Agency. www.KarenZacarias.com