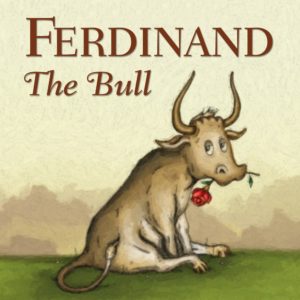 A classic tale of individuality, Ferdinand The Bull is the story of a bull who doesn’t want to fight and butt heads like all the other bulls: he just wants to take care of his beloved flowers. But when the belligerent Duque Dodo comes looking for the toughest bull in all of Spain to fight in Madrid, he mistakenly picks Ferdinand. In this fun and imaginative adaptation, including a pun-ful pig named Cochina who wants to be a star, and the matador Danilo, who really wants to be a Flamenco dancer, everyone learns to be true to themselves.

‘Ferdinand’ is outstanding in its field!…A clever script that managers to blend lofty Shakespearean themes with the corniest jokes ever!” – Chris Slattery, The Gazette

You had me at Moo” – The Washington Times

Ferdinand the Bull was commissioned and premiered by Imagination Stage in 2000 under the direction of Janet Stanford. It won the Tenth Annual Actors’ Playhouse’s National Children’s Theatre Festival, and has since enjoyed numerous productions throughout the country, including the Coterie, The Goodman Theatre, The Alliance Theatre, Oregon Children’s Theatre, Nashville Children’s Theatre, Childsplay, and the Lewis Family Playhouse.

Ferdinand the Bull is currently being optioned as a feature film, and the theatrical production rights are not available.

7. THE BULL IN UNBELIEVABLE - All

‘Ferdinand’ gets a big ‘Ole! – the classic book turns into a perfect mini-musical thanks to Zacarias and La Puma…crafted for English and Spanish-speaking children alike – it’s a hit!” – Holly Johnson, The Oregonian

KAREN ZACARÍAS (Book & Lyrics) was recently hailed by American Theatre magazine as one of the most produced playwrights in the United States. Her plays include Destiny of Desire, Native Gardens, Mariela in the Desert, Legacy of Light, The Book Club Play and The Sins of Sor Juana; adaptations include Into the Beautiful North, Just Like Us and How the Garcia Girls Lost Their Accent. Zacarías has written 10 TYA musicals with composer Debbie Wicks La Puma including Oliverio: A Brazilian Twist, Ella Enchanted: The Musical, Chasing George Washington: A White House Adventure, Einstein Is a Dummy, Looking for Roberto Clemente, Frida Libre, Jane of the Jungle, Cinderella Eats Rice and Beans, Ferdinand the Bull and The Magical Piñata. She collaborated on the libretto for Sleepy Hollow and Hemingway: The Sun Also Rises for the Washington Ballet at the John F. Kennedy Center for the Performing Arts. Her plays have been produced at the John F. Kennedy Center for the Performing Arts, Goodman Theatre, South Coast Repertory, the Guthrie Theater, Oregon Shakespeare Festival, Cincinnati Playhouse in the Park, Round House Theatre, GALA Hispanic Theatre, Denver Center for the Performing Arts, Dallas Theater Center and many more. Zacarías is a core founder of the Latino Theater Commons, a national network that strives to update the American narrative to including the stories of Latinos. She is the founder of Young Playwrights’ Theater, an award-winning theatre company that teaches playwriting in local public schools in Washington, D.C., and she is proud to be Arena Stage’s first resident playwright. Zacarías lives in Washington, D.C., with her husband and three children.  www.karenzacarias.com.

To hear a full demo of Ferdinand the Bull contact us directly via our contact page.
Meanwhile, visit Crunchynotes on Bandcamp to purchase other show tunes!