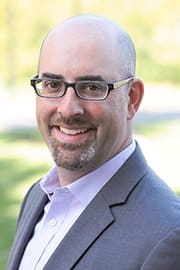 RAPHE BECK (Co-Librettist) hails from Chicago where he trained at Second City and the Piven Theatre Workshop.   He has enjoyed previous careers as a Teach for American corps member in North Carolina, followed by a career in Los Angeles as a screen writer working with Touchstone Pictures, Jim Henson Pictures, and DreamWorks Animation Studios.  Raphe Beck now serves as the executive director of the University of Oregon Alumni Association, after previously serving as the head of the Stanford Graduate School of Business Alumni Association. Raphe earned a BA in Creative Writing from Stanford, and an MBA from Berkeley-Haas School of Business.

Outside of work, Raphe is a mediocre chef and biker, but he is trying to get better at both. He lives with his family in Eugene.