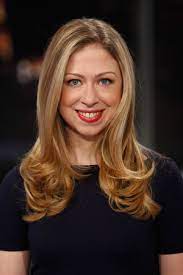 Chelsea Victoria Clinton is an American author and global health advocate.  She has authored and co-authored best-selling children’s non-fiction books, receiving numerous awards and honors, most recently the Children’s Defense Fund Children’s Champion Award in 2019.  Her first children’s book, It’s Your World: Get Informed, Get Inspired and Get Going!, was published by Philomel Books in 2015.   In 2017 she reached No. 1 on the New York Times Children’s Picture Books Best Sellers list with She Persisted: 13 American Women Who Changed the World, illustrated by Alexandra Boiger.   She went on to write two more companion books, also published by Philomel and illustrated by Boiger, entitled She Persisted Around the World: 13 Women Who Changed History and She Persisted in Sports: American Olympians Who Changed the Game.   The daughter of former U.S President Bill Clinton and former Senator and Secretary of State Hillary Rodham Clinton, she lives in New York City with her husband Marc Mezvinsky and their three children Charlotte, Aidan and Jasper.